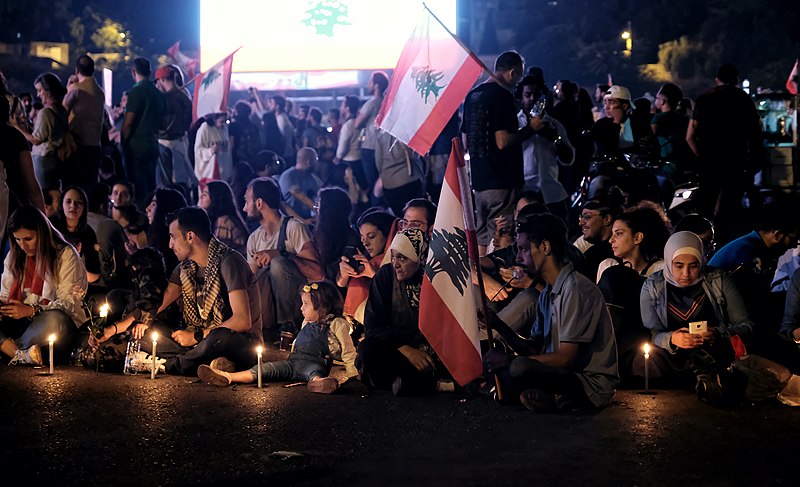 CHALLENGES AND OPPORTUNITIES TO ADVANCE THE WOMEN, PEACE AND SECURITY AGENDA AFTER LEBANON’S PROTEST MOVEMENT

October 2020 will mark the twentieth anniversary of the adoption of UN Security Council Resolution 1325 (2000) on Women, Peace and Security (WPS), which recognised the disproportionate impact of armed conflict on women and girls and the critical role that women continue to play in peace negotiations and reconstruction efforts. In 2017, the Lebanese Presidency of the Council of Ministers entrusted the National Commission for Lebanese Women (NCLW) – the government body responsible for the promotion of women’s rights – to develop a national action plan (NAP) on UNSCR 1325. Lebanon’s NAP, which was endorsed in September 2019, responds to the Resolution’s four pillars – prevention, protection, participation, and relief and recovery – and emphasises the increasing participation of women in decision-making processes in different domains (political, diplomatic, security and defense). As such, the NAP contextualises the WPS Agenda by bringing the discussion within Lebanon’s legal and policy frameworks and the persisting challenges of advancing women’s rights in the country’s political, legal, and socio-cultural spaces.

THE CHALLENGES OF ELITE POLITICS AND STATE FEMINISM

While there is an increased acknowledgment by the Lebanese state of the need to involve more actively women in peace processes, in practice women’s formal engagement in peace and security matters remains limited. The reality of women’s participation in decision-making should be examined within the framework of Lebanon’s consociational democracy, where executive power is shared along confessional lines. This model of democracy, which has been in place since the end of Lebanon’s civil war in 1990, places great emphasis on negotiation among elites, since the role of the political elite is seen as central in moderating inter-group conflicts. The ruling elite is largely male-dominated and represents the major religious sects in Lebanon. The power-sharing political system means that the ‘elite’ is committed to preserving this existing system through building a relationship of political clientelism with their followers that involves a series of exchanges of goods and services by the ‘patrons’ or politicians in return for political support. The elite further gains legitimacy from patriarchal heads of religious sects to further consolidate their supremacy.

Lebanon has a dynamic history of women’s activism. In 1953, the Lebanese Council of Women, a civil society organisation, successfully lobbied for women’s voting rights, eliminated the law forcing women to renounce their citizenship upon marrying foreign men, and ended restrictions on women’s right to travel without the written consent of their fathers or husbands. However, this has not always translated in to participation in decision-making. Women were not part of the peace negotiations that ended hostilities after the end of Lebanon’s civil war, and since then their participation in decision-making has been limited. Despite women’s increasing electoral turnout, only 5% of parliamentarians elected in 2018 are women – the highest rate compared to previous elections.

While women groups successfully advocated for the postwar governments to give supremacy to international treaties over Lebanese law, women’s rights have been ‘governmentalised’ through state bodies, in what has been called ‘state feminism’, which is feminism sanctioned by the state. These state bodies, often including women linked to political parties or figures, were charged with taking forward the government’s priorities for advancing women’s rights and status, but would do this at the expense of the plurality of women voices. An example of this is the formation of the NCLW in 1998 as an affiliate committee to the Presidency of Council of Ministers, with the aim to promote women’s rights and oversee the implementation of the Convention on the Elimination of all forms of Discrimination Against Women (CEDAW) and the Beijing Declaration. By norm, NCLW is headed by the President’s wife, or as in the case currently, the President’s daughter.

Political appointments of women have resulted in a narrowing of space for diverse groups of women’s rights activists. They have also made the WPS Agenda more vulnerable to political agendas. In their work towards the advancement of women issues, and considering the constraints placed on them by the confessional, neo-patriarchal system, most of civil society’s work supporting women’s rights lies in providing legal counselling and life-saving healthcare for women survivors of sexual and gender-based violence to acquire community and legislative protection. Whilst this work is vital, there has been less of a focus on meaningful participation in peace processes and conflict prevention.

Gender equality is, now more than ever, accepted as being central to peacebuilding and development. Advancing gender equality and inclusive peacebuilding requires working with women and girls, but also with men and boys to sustainably transform unequal gendered power relations. Against the backdrop of understanding peacebuilding efforts and gender dynamics, International Alert applies a holistic approach to gender, that examines how identities of women, girls, men and boys, and other gender identities interact with societal markers such as age, urban or rural location, ethnicity, sexual orientation, religion and dis-/ability.

In Lebanon, men have historically dominated conflict and peace decision-making. They are present as politicians, clergymen, negotiators, and fighters. However, the extent to which such roles, among others, manifest patriarchal or violent masculinities, and how such roles intersect with other societal markers to shape conflict and peace and, subsequently, women’s role in these, remains under-examined. These intersections are complicated by sectarian and class divisions, compounding barriers to meaningful participation of women from different backgrounds in political life. In order to open spaces for such participation, there is a need to address the sources of inequality and injustice, unequal access to resources and power, and discriminatory sociocultural practices, not only based on gender, but also on gender intersectionality with different societal markers. This would allow for a better understanding of how to transform the gendered inequalities created and perpetuated by patriarchal institutions.

Importantly, crises have the potential to transform gender relations and create opportunities for women to challenge restrictive gender roles and assume leadership positions. In times of transition, pre-crisis norms of gendered behavior can be disrupted with the breakdown of existing society practices and state policies, and the reinstating of a new social contract with the state and of the rule of law, in general.

Since October 2019, Lebanon has been witnessing such a crisis: a nationwide popular protest movement that has transcended geographical, religious and class divides. This movement has seen a significant role for women, in leading protests and forming human shields to peacefully protect male protestors in cases of clashes with security forces. The movement accentuated a reinvigorated activism amongst women and provided new opportunities to open discussions around unequal access to rights and meaningful participation in peace and security. For women to make transformative political gains in post-conflict settings, three factors should play out: a disruption in systematically established gender norms, an active women’s movement based on civil society rather than party politics affiliation, and international support.

It is important that Lebanon’s NAP addresses sources of inequality and injustice based not only on gender, but also on gender intersectionality with different societal markers such as age, religion and provenance

According to data collected by International Alert (publication forthcoming) and confirmed by several women activists, women have been instrumental in diffusing tensions in certain instances as well as in decision-making within activist groups, although this regressed as events unfolded and systems once in place were realigned to patriarchal norms, even within activist groups.
The current cabinet formed after the October 17 protest movement saw the appointment of more women ministers, outside political parties’ affiliations, and in ministries historically viewed as male-dominated, such as defense, justice, and deputy to prime minister. Whilst it is important not to automatically conflate more women in cabinet roles with the advancement of the WPS Agenda, this dynamic provides potential for more meaningful participation if progressive steps are taken to give more space for women and avoid a return to patriarchal norms. Among these steps is the creation of space for grassroots initiatives and the linking of local and national level efforts.

International Alert’s peacebuilding approach to WPS issues in Lebanon supports locally-led initiatives by women activists and groups. Alert supports, for example, a network of activists, journalists, faith leaders and representatives of political parties and municipalities in the Bekaa Valley, which use dialogue to promote community peace and alleviate rising tensions and their gendered impacts. A priority of this network is advancing UNSCR 1325 and women’s role in conflict prevention: thus it organised a Women Towards Peace Initiative to support women’s role in peacebuilding and mitigating tensions between host and refugee communities. It trained women of both communities on conflict analysis, tensions mapping, and stakeholder engagement, and held conferences and consultations with other civil society organisations and authorities on UNSCR 1325 to advocate for women’s role in strengthening social stability.

CONCLUSION: REFLECTIONS ON ADVANCING THE WPS AGENDA IN LEBANON

Drawing on the lessons above, it is important that Lebanon’s NAP addresses sources of inequality and injustice based not only on gender, but also on gender intersectionality with different societal markers, as this will help ensure that women’s meaningful participation in conflict prevention is gendered and inclusive – avoiding, in the process, to replicate and reinforce existing patriarchal power structures.
Peacebuilding efforts are most effective when led by the women’s rights activists and local communities themselves. Thus, the rollout of the NAP should support locally-led women peacebuilding networks and open dialogue spaces with grassroots groups, in particular those established by the protest movement post-October, to inform the national WPS Agenda. In that context, it is also important to increase the role for civil society women networks and activists in oversight of formal structures.

To conclude, research shows that countries where women experience less protection are more likely to engage in conflict compared to countries where women have greater equality and political participation. Because of this, the NAP should address UNSCR 1325’s second pillar on women protection, not only as a fundamental human right, but also as a catalyst to lasting peace.

Aseel Naamani is a Programmes Manager at International Alert in Lebanon.