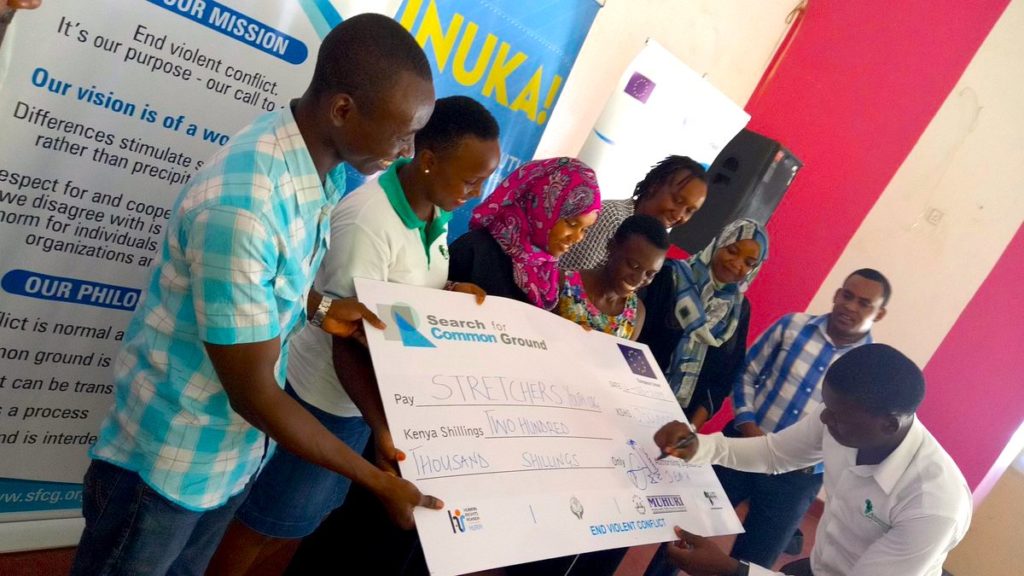 Many development and peacebuilding NGOs are working today to prevent and counter violent extremism (P/CVE). Among these is Search for Common Ground (Search), an international NGO that has, over the years, developed its own approach, called Transforming Violent Extremism (TVE). But what is the evidence that a peacebuilding approach can effectively contribute to addressing violent extremism?

Over the last year, AP has completed the evaluations of three projects that Search has implemented in Kenya and Tanzania, and these have found several lessons that could interest all organizations working on P/CVE.

Kenya and Tanzania have both experienced an increase in violent extremism and terrorism. Kenya has been the most affected, with several high-level attacks occurring in the country over the last 10 years; in contrast, in Tanzania the phenomenon is still relatively recent and localized. Despite these differences, however, the drivers of violent extremism are similar and linked to external and internal factors.

External factors include the emergence of jihadist groups, especially Al-Shabaab in Somalia, whose reach has effectively tapped into local grievances and inspired citizens to conduct attacks in their own countries. Internal factors include social, political and religious grievances, which, combined with terrorist propaganda, can result in the emergence of groups embracing and promoting violence as a mean of achieving change. A last factor is role of the governments, which both in Kenya and Tanzania have generally focused on coercive means and securitization, which have exacerbated feelings of discrimination on the part of different segments of the population. A notable counter-trend in this respect has been the adoption by Kenya’s authorities of the National Strategy to Counter Violent Extremism (NSCVE), which has emphasized a more inclusive approach to P/CVE.

It is in this context that Search has been testing its new and unique approach. The Transforming Violent Extremism (TVE) approach looks to shift how people engage and how grievances are addressed. It relies on four pillars:

In line with the TVE approach, the main activity in all projects was the promotion of dialogue at community level in different locations, including four counties in Kenya’s Coastal Region (Kilifi, Kwale, Lamu and Mombasa) and Dar-es-Salaam, Zanzibar, Arusha, and Tanga region in Tanzania. Dialogues were organized both within communities as well as between community groups and local authorities. All initiatives also featured a media and technology component: in Kenya, for example, a Whatsapp platform was created to allow communities and law enforcement agencies to share relevant information; in Tanzania, Search produced and broadcast a radio talk show. The evaluations, which were conducted in 2018 and early 2019, were an opportunity to answer key questions in relation to the impact of Search’s TVE approach, and they successfully identified four important lessons learned.

The first lesson is that successful community dialogues require multiple steps before adversary groups can come together. Groups need first to convene separately to understand their concerns and to prepare to meet their adversaries; only then can dialogues including both parties lead to find joint solutions. Where this approach was effectively used, for example in Kenya’s Lamu County and Tanzania’s Tanga region, is where the evaluations found the most evidence of impact.

Secondly, working with grassroots civil society organizations CSOs is necessary to achieve positive impact. The evaluations found that community members tend to trust such organizations much more than those coming from the outside. These CSOs also usually engage some of the people most vulnerable to manipulation by extremist groups, and are ideally placed to give them a voice.

The third lesson learned is that technology can help to counter violent extremism only when an appropriate approach and type of technology are adopted. The best examples came indeed when beneficiaries themselves were involved. In Kenya’s Lamu County, the project introduced a smartcard that allowed the police to more easily identify fishermen, and this led to the lifting of a very contentious ban on night fishing. In Arusha, Tanzania, participants suggested WhatsApp as a platform to keep each other updated and share information: the platform is indeed still active.

Finally, the success of TVE initiatives is highly dependent on the national context and the attitudes of authorities. To be effective, NGOs need a favorable environment, including the presence of a policy on P/CVE. In this regard, Search’s efforts in Kenya were more impactful to communities in large part because of the NSCVE, which provided a platform for coordination between stakeholders. In Tanzania, where a similar strategy or policy was absent, Search had a more difficult time.

Overall, Search’s TVE approach has proven to have the potential for positive impact. The focus on phased dialogues, together with the empowerment of grassroots CSOs, should be seen as essential elements for P/CVE programming in East Africa, and also in other countries affected by violent extremism. However, it will also be important to influence national policies, as this will be critical to ensure that all changes, once achieved, are truly sustainable.

The final evaluation report for the project in Kenya, entitled “Inuka! A Community-led Approach to Violent Extremism in Kenya” can be accessed here. The final evaluation report for the two projects Tanzania, entitled “Katika Usalama Tunategemeana: A Community-Owned Approach to Promoting Moderate Voices in Tanga” and “Pamoja! Strengthening Community Resilience” is accessible here.