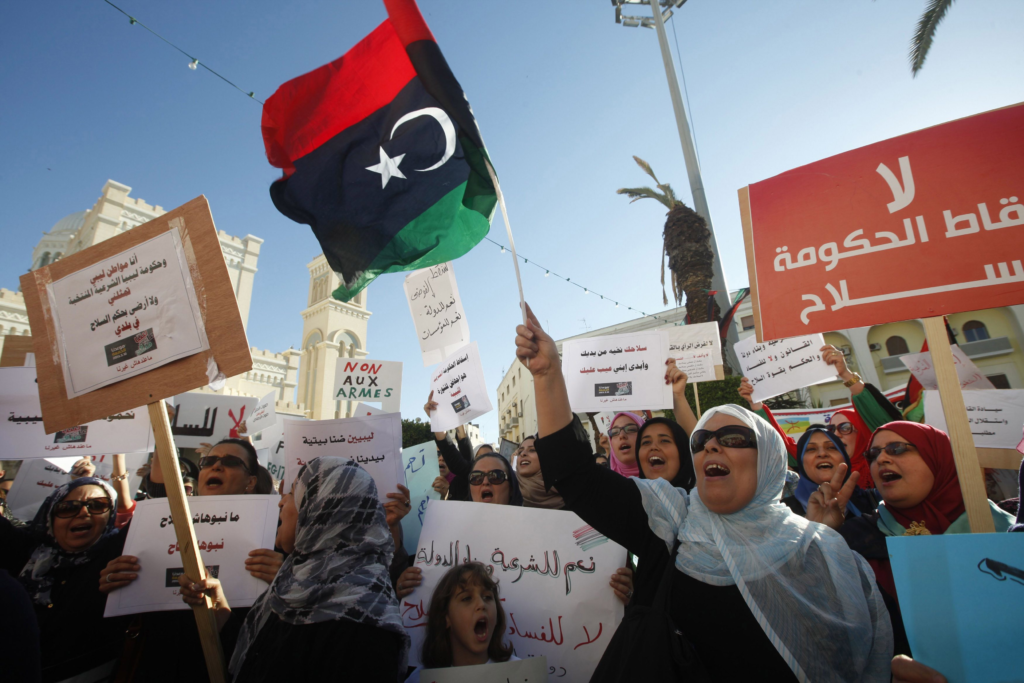 Women’s marginalization and the failures of the Libyan peace process

The riots witnessed this June and July are indicators of how Libya is entering a new cycle of instability. This is a notable setback from the situation that was created following the Berlin conferences of 2019 and 2021, which had re-created a government of national unity and got factions to agree to a new political roadmap. Elections were called for the end of 2021. Greater stability was supposed to follow.

Libya is instead being shaken by riots, and the return to instability should be seen as a failure on the part of the international community, which has been unable to follow through with the roadmap established in Berlin. Elections have, in fact, been postponed indefinitely, and the political situation has reverted to a context similar to that of years past, with two governments, one in the East and the other in the West, vying for territorial, economic and political control of the country. Libya remains deeply divided along geographical, political, religious and ethnic lines, and ongoing conflicts at the local level make the situation as unstable as it has ever been.

Among the least considered obstacles to peace and stability is the fact that Libya’s ongoing peace processes often replicate the very dynamics of marginalization that has fed conflict in the first place. This is nowhere more evident than in the situation of women, who have played an important role in the country’s uprising, but whose condition remains the same, if not worse, when compared with the pre-2011 period.

Women in Libya have, in fact, been historically marginalized and discriminated. Under former dictator Mohammad Gaddafi, policy and reality were split. In theory, progressive legislation guaranteed equal rights and equal status for women. In practice, a societal debate that truly challenged conservative ideas on gender roles was absent; women’s organizations were not socially permitted; and progresses in the condition of women were used as mere propaganda to prove Libyan’s modernity.

Yet, women were very actively involved in the revolution that overthrew Gaddafi in 2011. This marked a turning point in women’s possibility to influence politics: after the revolution, hundreds of civil society organizations were established and women’s participation in them was central. A quota system was introduced in elections to support women’s participation and inclusion in decision-making processes. These changes had some effects on women’s lives, charting a path that could have been starkly different and better than what Libyan women would have faced before 2011.

Much of these achievements have now been rolled back. Religious groups and conservative segments of Libyan society continue to reject gender equality. Violence against women remains pervasive, not just in domestic spaces, but also publicly, with several prominent women activists and politicians having been attacked and murdered in the last decade. Insecurity fosters exclusion, as it becomes a justification for keeping women away from public spaces and meetings. The quota system has remained largely ineffective because of insecurity, and also because of patriarchal notions, where women in politics are depicted as not valuable. The situation has become so bad that even the United Nations Support Mission in Libya (UNSMIL) had to concede that “the public space for Libyan women to voice their opinions and take an active role in the political life and post-conflict reconstruction is rapidly shrinking”.

The marginalization and exclusion of women is also visible in the official, UN-led peace process, which remains dominated by men. Here, the failure of the international community is most conspicuous, for there is an established policy framework that mandates states to exactly these challenges. This is United Nations Security Resolution 1325 on Women, Peace and Security, which was adopted in 2000 and has since become one of the most prominent policies to ensure greater inclusion in peacebuilding. And indeed there have been attempts to use this Resolution to improve women’s participation in Libya, including by the European Union, but to little or no effect.

Today, resistance to the status quo comes therefore mainly from activists and civil society organizations. One is Together We Build it, a women-led organization that works to promote the role of women in peacebuilding, also by leveraging Resolution 1325. But there are many more women activists who work mainly at the community level to promote dialogue that is preventing and resolving violent conflict.

Such efforts remain poorly supported by the international community and far removed from mainstream media narratives. Policies and practices suggest that involving women in peace and security is necessary for a future of sustainable peace and development. For this reason, the international community should try and change its responses to Libya’s instability. Some of these changes appear relatively straightforward, like the need to integrate gender-sensitive considerations across initiatives to reform the country’s institutions and security sector. Responses to gender-based violence should also be strengthened.

Still, real change also needs social and political action. In this regard, elections remain fundamental and should be prioritized once more—as that is what Libyan citizens want. Efforts to increase women participation should then move beyond the quota system and include initiatives targeting men. Indeed, research shows that men’s role in gender equality is critical to achieve long-term change. Finally, international institutions should strengthen the mandate and resources of UNSMIL to more effectively represent Libyan women’s needs and be more active in the legal protection of women.

Bernardo Monzani is the President of AP and Mariachiara Giaccai collaborated with AP over the Spring 2022.