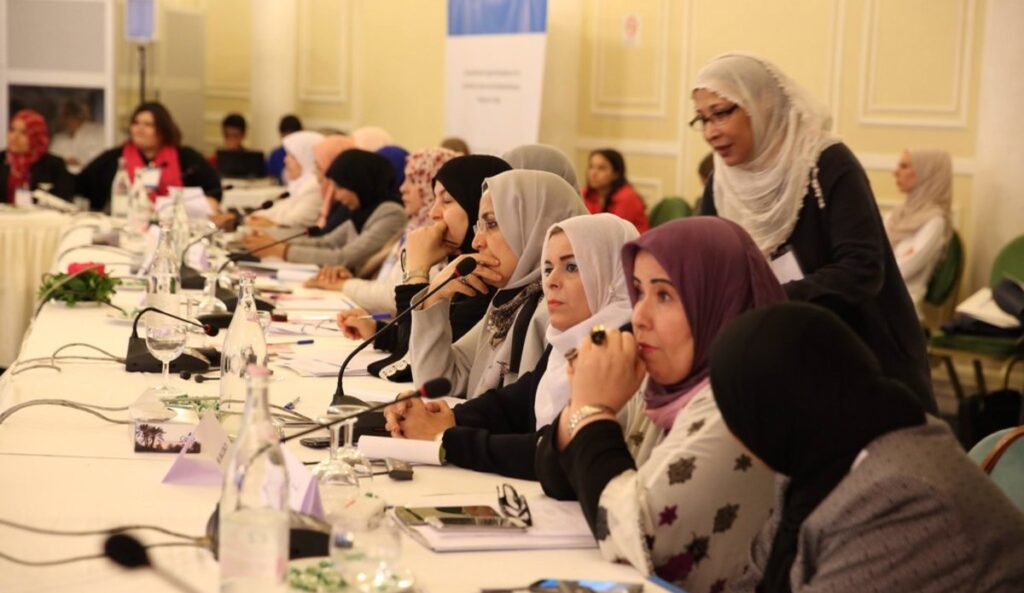 THE EUROPEAN UNION MEDIATION AND THE WOMEN, PEACE AND SECURITY AGENDA IN THE LIBYAN PEACE PROCESS

Since the peace talks started, Libyan women have been at the forefront, calling for their inclusion and meaningful participation in the peace process. Despite this, they have been marginalised, underrepresented and excluded from the high-level peace talks. As this year marks the twentieth anniversary of the adoption of United Nations Security Council (UNSC) Resolution 1325 on Women, Peace and Security – one of the most mediatic and well-known of the UNSC Resolutions – it is critical to take a stance on the current debates surrounding the accountability and implementation of the agenda, including the recognition that the full involvement of women in conflict resolution, peacemaking, and peacebuilding can significantly contribute to the maintenance and promotion of international peace and security.

“From my own experience in Libya, I know the only reliable requirement for admission to peace talks is a gun.”

In 2008, the European Union (EU) became the first regional organisation to formally acknowledge the WPS agenda and place it at the centre of EU’s foreign policies, inter alia, crisis management and mediation. This is not surprising, as the EU is a regional organisation whose identity is often referred to as the world’s most successful peace project and a critical global actor in the promotion of gender equality. Despite this, we still know relatively little on how the Women, Peace and Security agenda is being implemented by the EU in peace processes.

For this reason, Libya presents an interesting case study for exploring the implementation of the Women, Peace and Security agenda given that, firstly the EU has showed an explicit commitment to working on peace and stability in the country; and secondly the inclusion of women in peace processes in conflict-affected countries has been one thepriorities of the EU’s strategy on conflict resolution and mediation.

THE EU’S APPROACH TO SUPPORTING WOMEN’S PARTICIPATION IN LIBYA

Nine years after the Libyan revolution and Qaddafi’s defeat, Libya still bears the brunt of an ongoing armed conflict and widespread insecurity across the country, struggling to end a vicious cycle of violence between different factions, jihadi groups, armed militias and foreign interference. After different rounds of ‘exclusive’ peace talks, which have failed in stopping the ongoing conflict, the prospect of a lasting peace in Libya has intensified the scepticism as how to solve this war. The Libyan negotiations, mediated under the leadership and auspices of the United Nations Support Mission in Libya (UNSMIL), have now gone through many different iterations, and throughout these the EU has been working very closely with the UN mission and has been very supportive of the Libyan peace process.

When discussing women’s involvement in the Libyan peace process, we need to distinguish between the first, second and third track peace process, with meaningful participation being the more challenging the closer women get to the high-level decision-making. Track 1 includes the main initiatives that are part of the formal peace process: the Libyan Political Agreement of 2015 (the most detailed peace agreement to date), the Palermo Conference of 2018 and lastly, the Berlin Conference held in January 2020. In these high-level talks, the EU’s role in engaging and pushing for a more inclusive process, with the participation of Libyan women, has been shy. EU political actors, pressed to obtain an immediate ceasefire to the conflict for the stabilisation of the country, have been focused on the ‘promotion of negative peace’ in the Libyan peace process, thus putting questions of women’s representation to the side.

In these formats, most of the time only ‘elite’ women have enjoyed access to the room, raising questions about what and whom women of this status represent, and most important, the real impact women have on the peace process. As research on peace processes have shown, women’s exclusion from each stage of a peace process reduces their ability to meaningfully influence the outcomes throughout the peace process. In the case of Libya, as shared by Zahra’ Langhi, a Libyan expert on gender and conflict resolution, their exclusion further represents a “gender paradox”: women have been politically at the centre of the revolution, but have been excluded from the post-Qaddafi political sphere.

Instead, the EU’s approach to supporting women’s participation to peace and security in Libya has been focused mainly on creating and financing separate or informal tracks for women. These projects, which fall under track II and track III efforts, look more at the resolution of conflict at the local level, with the aim of helping to sustain the UN-facilitated negotiation process. On a positive note, these initiatives on the ground have taken into consideration an intersectional approach, focusing on the gender dimensions of Libyan tribes, structural gendered inequalities and the different local specificities of the Libyan context. At this level, Libyan women have successfully worked with extremists’ homes, and contributed in the signing of local truces, creating a powerful dialogue to promote peaceful coexistence and inclusion in their respective communities.

Yet, although these spaces are vital for providing common solutions and crucial in reconciling local truces, they have been neglected by the main political stakeholders in the formal negotiations. After 5 years of continuous cycle of violence and repetitive failures of these high-level formats, it is clear that progress achieved in track II and track III efforts have not substantially influenced the formal peace process. Moreover, in choosing this approach, there is a risk of reinforcing the idea that women should be involved in separate spaces and perpetuating a vicious cycle of exclusion from the direct talks.

CONCLUSION: MOVING FROM EXCLUSION TO INCLUSION

The Libyan peace talks are still an ‘exclusive’ process, in which the major parties are represented by men, with the exception of a few ‘elite’ women. This represents a shortcoming of the EU’s approach, yet women’s exclusion from the direct talks should not be seen as the entire responsibility of the EU: UNSMIL and other mediation actors, along with the main rival powers, have not taken their full responsibility to ensure that women can meaningfully participate at the highest level. Within this context, we should also consider that the status of women’s rights in Libya, along with militarisation, patriarchal norms, insecurity and cultural issues, has also negatively impacted the implementation of the WPS agenda in the EU’s broader mediation efforts.

The Libyan peace process is an example of failed mediation attempts and broken peace agreements, both of which can be rooted in masculinised forms of power, security interests and a very narrow focus on military affairs.

The case of Libya leads us to two main conclusions on how new and future spaces for an inclusive peace process can be opened, not only in the context of Libya, but also others where the EU is and will be involved in mediation processes.

Firstly, the Libyan peace process is an example of failed mediation attempts and broken peace agreements, both of which can be rooted in masculinised forms of power, security interests and a very narrow focus on military affairs, which suggests that this model of peacemaking does not work. Looking ahead to the future of Libya’s post-conflict transition, women’s exclusion from the peace process will cause a fragile equilibrium in Libyan society. For this reason, women’s presence at the negotiation table is critical not only in achieving a sustainable and long-lasting peace, but also in transforming the gendered power relations and inequalities that have been shaping Libyan society.

Secondly, there is a critical gap between the EU’s ambitious policy commitments on women, peace and security – which call for the direct participation of women in the formal peace process  – and the implementation of the agenda on the ground in Libya. EU mediators are seen as critical agents to implement the Women, Peace and Security Agenda and, most importantly, they have the power to link and coordinate women’s groups at the community level with the leadership of the parties in conflict. In this sense, a clearer institutional design and a stronger political will in pushing for women’s inclusion ‘at the negotiation table’ from the beginning would have been critical in advancing women’s participation in the peace process.

As negotiations are very much ongoing, the EU is in the unique position to strengthen its diplomatic efforts and put at the center of its strategy Libyan women’s leadership in peace and security. In today’s Libya, women as agents of change are needed more than ever in bringing an end to the conflict, and building a gender-just, sustainable and positive peace.

Federica Tronci recently graduated from the London School of Economics and Political Science, where she conducted her research on EU mediation, Women, Peace and Security, and conflict-related sexual violence in the Middle East and North Africa.