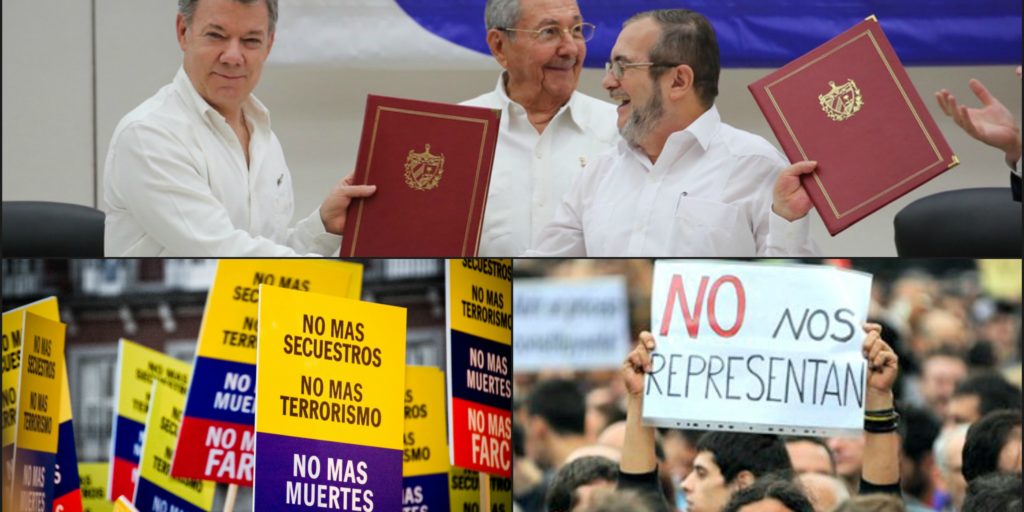 The negotiation is now over: on November 24, the Colombian government and the guerrilla movement known as the Fuerzas Armadas Revolucionarias de Colombia – Ejército del Pueblo (FARC-EP) signed the new and final version of the peace accords. The majority of Colombia’s social sectors continue to oppose them, however, and while Colombian president Juan Manuel Santos is due to receive the Nobel Peace Prize in Oslo this month, the crucial challenge will now be the implementation of what has been agreed.

The new accords follow the referendum of October 2nd, when Colombians were asked to confirm the original agreements signed by the government and the FARC-EP, which referred to the bilateral cease-fire that effectively ended a conflict that has lasted half-a-century, cost the life of more than 220.000 people and created around 7 million internally displaced persons (IDPs). The original accords were signed on September 26 in Havana—the culmination of a four-years-long process of mediation led by the Cuban government. To everyone’s surprise, however, the NO side won the referendum, a result that interrupted the implementation of what the parties had agreed, but did not permanently end the negotiation process, which includes some very innovative features.

The referendum’s results brought to light the deep regional differences that characterize Colombia today. The YES side won in rural areas with high levels of social marginalization—where President Santos had won in 2004—and in those most affected by the conflict, where peace was seen as an incredible opportunity for development and a path towards forgiveness that could halt the cycle of violence. On the other side, the NO side had more success in those provinces that had supported former president Álvaro Uribe, who had defined the signing of the accords as “a strike to peace”. In these areas, less affected by violence and more integrated into the country’s economic and political centre, peace has been seen as a threat benefitting only the FARC. In addition, there was a marked disinterest in the conflict from a consistent part of the population, which led to the lowest turnout of the last 22 years.

In this context, an analysis that tries to understand the current socio-political situation cannot be separated from an analysis of the root causes of the conflict in Colombia, a nation that has essentially been at war since the moment it was created. Such an approach allows for a more precise and useful assessment of the tensions that are still unresolved in spite of the peace accords. It also brings to the fore the need to look not only at what happens at the highest government levels, but also at the opinions and voices of common people.

Several analysts have for example expressed strong concerns about several critical issues, including the fact that President Santos, while negotiating with the FARC, has also passed laws inherently contrary to the spirit of the accords. One can, for example, look at the new Police Code, which is regressive in terms of due process and fundamental rights, or at the law creating zones for rural, economic and social development (Zidres), which worsens the high levels inequality linked to the concentration of land ownership. Laws have also increased the criminalization of social protests: as such, the implementation of the peace accords will take place at a time when threats to community leaders are increasing. This is in line with the narrative, disseminated by state media, that in Colombia today there are no paramilitary groups, only common criminal gangs with no ties to government security forces. Facts, however, point to the contrary and it is because of this, for example, that Human Rights Watch (HRW) has recently published a statement calling for the government to suspend the promotion of those army generals who are known to have collaborated with paramilitaries and have been involved in cases of “false positives”.

HRW has also, and on several different occasions, shed light on the limits that the peace accords pose in relation to transitional justice, and in particular to the guarantees that those responsible for war crimes are tried and given an appropriate sentence, and that they don’t elude the penal responsibilities for crimes committed by those under their command (known also as the responsibility of command).

In the new accords, the majority of the issues raised by supporters of the NO side appear to have been accepted. Particularly relevant are the changes made in relation to restricting the freedom of movement of former guerrilla fighters. However, the Uribe camp still remains unhappy about other issues, including in regards to the political participation of FARC members, which has been unchanged. In this case, most analysts have explained that a cornerstone of all peace processes is that combatants are allowed to relinquish their arms and enter into politics legitimately. “This process with the FACR is not an exception, and it cannot be one”, added President Santos, “the FARC has a political origin and it is their intention in the future to participate to politics without weapons.”

In regards to this and other issues, the country’s polarization remains deep, as does the conviction that, until the roots of the conflict are addressed through economic and social policies, this could be re-ignited—and that one cannot yet talk about credible peace. Attempting to analyse Colombia’s current situation, today as well as in the past, opens in other words a Pandora’s box: the complexity is increased by the geostrategic importance of the country in global dynamics, on account of its natural resources, and its role in global drug traffic.

The way to untangle this complexity, and the key to promoting sustainable peace, can thus be found by listening to the voices of those grassroots movements who continue—day in and day out—to pose questions about Colombia’s future, and, starting from these voices, by building alternative solutions from the bottom up. A good example of this is the recent visit in Italy by members of the Comunidad de Paz de San José de Apartadò, who, while being in favour of peace, have expressed serious doubts about the accords, particularly in relation to the absence of international judges in transitional justice processes and to the risk of impunity for paramilitaries still active in the country. While the negotiations are now over, it therefore remains imperative, for the future of peace in Colombia, to listen closely to these grassroots voices.