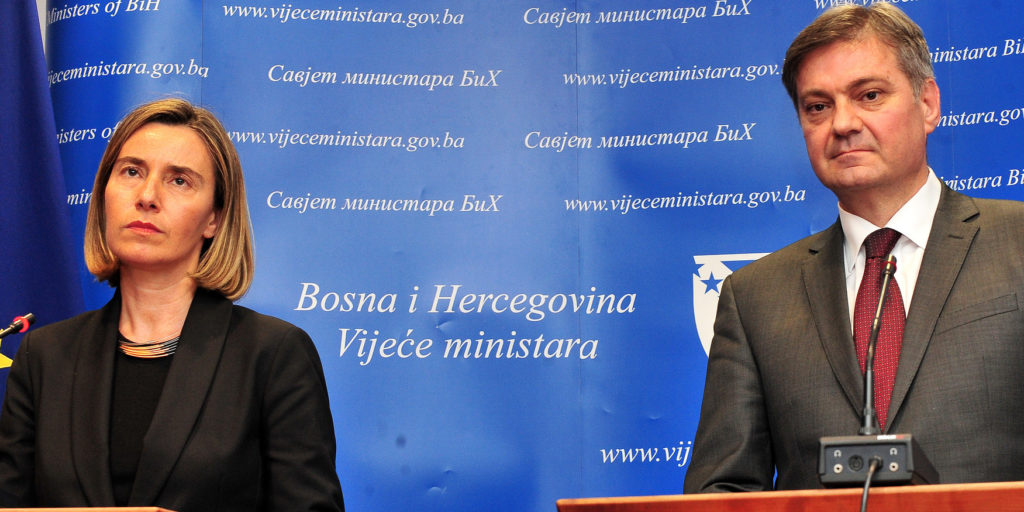 PEACEBUILDING AND THE EU ACCESSION PROCESS IN BOSNIA HERZEGOVINA

Bosnia Herzegovina (BiH) officially applied for EU membership in February 2016. The country, which is still struggling with legacies of the devastating 1990s war, dealing with the transition from a socialist economy to a market economy, coping with tensions among ethnic groups (strumentalised by political parties) and emerging from the global economic crisis, is now entering a new phase in the EU Accession Process which will determine whether the country is ready to acquire the status of candidate country to the EU. While the promise of EU membership offers new glimmers of hope to its population, the EU’s current approach to BiH, which focuses more on economic reforms than reconciliation, raises questions about the extent to which the EU Accession process will in fact support peacebuilding in the country and in the wider region.

The 2015 Enlargement Strategy reaffirms that “the enlargement policy is an investment in peace, security, stability in Europe”. According to many analysts and to EU officials, the EU Enlargement strategy has been the most successful EU Foreign Policy when it comes to maintenance of peace. The so-called Copenhagen Plus criteria include the requirement of full cooperation with the International Criminal Tribunal for the Former Yugoslavia, refugee return, regional cooperation and reconciliation, and the resolution of bilateral disputes or of statehood dilemmas. In addition, they require the respect for and implementation of various political and peace agreements stemming mostly from the armed conflicts of the 1990s, which affected the region.

With regards to BiH, the EU’s recognition of the past legacies of the conflict is very thorough in the Accession Reports but it is not clear how it will feature in the accession negotiations. The 2016 Accession Report recognizes that there has been some progress on governance issues, including cooperation between the state and the entities, but that the Constitution remains in breach of the European Convention on Human Rights (as per the Sejdić-Finci ruling of the European Court of Human Rights’), no progress on the adoption of state legislation on civilian victims of war, some progress in the prosecution of war crime cases involving sexual violence but no progress in supporting conflict-related sexual violence victims with low socioeconomic status and limited access to justice, while the progress in providing in-court victims and witnesses support was possible mainly thanks to international financial support.

While these and many other war-related issues are still in desperate need of attention in BiH, it is now clear that the chances for its accession to the EU are more closely linked to its ability to implement the Reform Agenda, a package of reforms adopted in June 2015 under pressure by the EU and International Financial Institutions. The Reform Agenda includes measures to address financial stability, labour market reform, social welfare and pension reform, public administration reform, and improvements in the rule of law and good governance. In particular, the measures include liberalising the labour market, reducing the size of the public sector, shifting the social welfare system from universal to targeted coverage, privatizing health system and investing in infrastructure. Only upon measurable progress in implementing these reforms will there be investment in social infrastructure and development, such as for example investments in education, labour skills and training, health services and access to water and sanitation.

As a number of analysts are now highlighting, these neo-liberal and austerity-driven reforms will most likely affect the poorest segments of the population, including those who have struggled to recover financial and job security after the war, and women in particular. The article Post-conflict economic reform is a women, peace and security issue by Professor Jacquie True explains how women will most likely lose out from the roll out of the reform and “be the beneficiaries of low-skilled and poorly paid jobs, of a profit-driven health system which enables quality services only for those who can pay, of a trimmed public sector with less community services and social support for the care of children and the elderly, and a targeted system that will force poor women into the labour market and likely require war widows and survivors to continually ‘prove’ their status to meet eligibility requirements for welfare payments.” The article shows how the EU-supported reforms are closely connected to post-conflict issues and how they could adversely affect BiH’s still fragile recovery and, ultimately, its path towards peace.

While for many years the EU had pushed for more radical reforms aimed at repealing the discriminatory norms emerged from the Dayton Peace Agreement, such as the Constitution, the lack of progress and the fear that the situation would spiral out of control prompted the EU to change its approach. Current views in Brussels are that a country with stable and accountable democratic institutions and a more vibrant economy will be in a better position to deal with peace and reconciliation. While this might be the case in principle, from a peacebuilding perspective not including clear conditionality for the country’s path towards a more stable peace in the framework of the Accession Process would be a missed opportunity. It also runs the risk of leaving these more delicate and controversial issues to the country’s elites which have no interest in pushing for reconciliation and all interests of keeping the country divided along ethnic lines, as the results of the 2016 local elections showed.

The jury is still out on whether the EU Accession Process will continue to be the key foreign policy for the maintenance of peace and stability in Europe. With many conflict scenarios open around the globe, an ever-changing world order and increasingly unpredictable actors, the EU cannot afford to fail in the Western Balkans. If the EU is to support peacebuilding in BiH and the wider region, it needs to be at a minimum conflict sensitive, which means avoid supporting policies and reforms that could further escalate social tensions such as the current Reform Agenda, support peacebuilding by introducing specific conditionality on specific war-related issues and open the process, so far only involving political elites, to civil society and the population at large