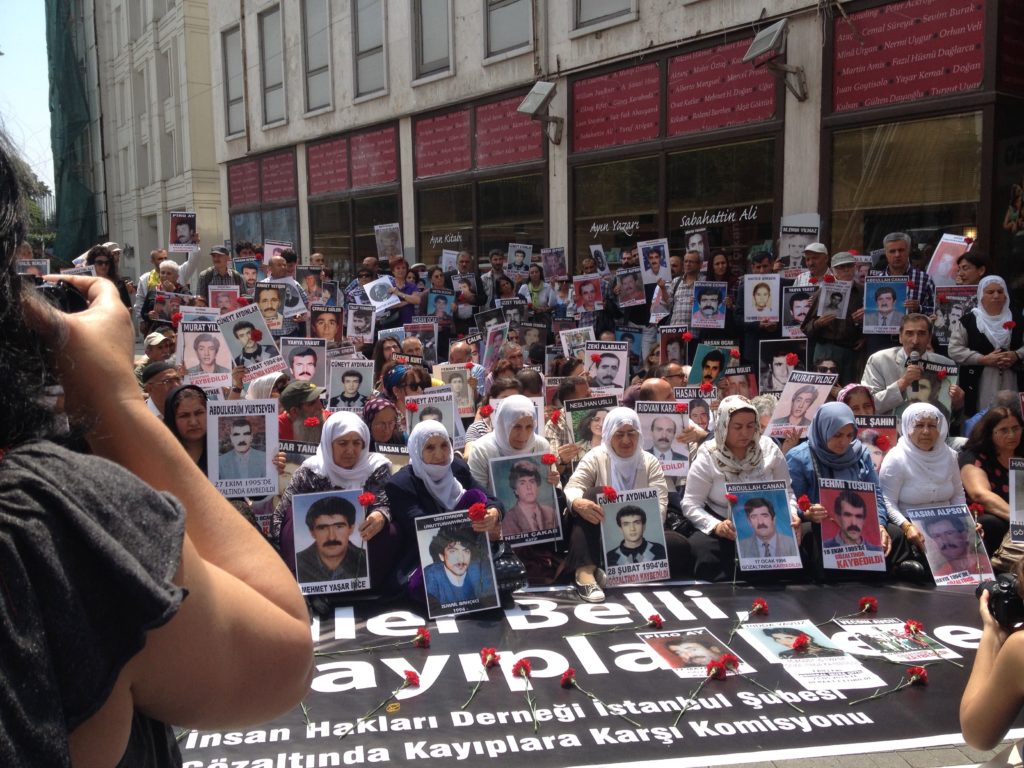 WOMEN’S PARTICIPATION IN PEACE PROCESSES: THE CASE OF THE “WOMEN FOR PEACE INITIATIVE” IN TURKEY

Since the 1980s, Turkey’s Southeast has been embroiled in a conflict—at times violent and at times low-intensity—related to the country’s continuous discrimination against its Kurdish population. Kurdish struggles for basic rights and equal citizenship have included both peaceful political activities for civil rights and the Kurdistan Workers’ Party (PKK)-led insurgency. The contingencies of political violence and displacement among the Kurdish population disproportionately affected women and children, and fed into the overall poor indicators of gender equality in Turkey.

During the last decade’s attempts to reach a peace deal between the ruling Justice and Development Party (Adalet ve Kalkınma Partisi, or AKP) and the PKK, and especially during the 2013-2015 peace process, women were at the forefront of civil society initiatives for peace, both individually and collectively. A broad platform called Women for Peace Initiative  brought together a range of ideologically diverse organisations, which created unprecedented opportunities for bridging the persistent ideological and ethnic divides among women’s NGOs through new forms of empathy and solidarity. As part of the Initiative, women peacebuilders met regularly in different parts of Turkey to discuss, among others issues,  interethnic reconciliation, the amnesty of Kurdish political prisoners, and various modes of integration of former guerrillas into civilian life once the military wing of the Kurdish movement is abolished.

My field interviews with women activists in Istanbul, Ankara and Diyarbakır during my research on the peace process between 2013 and 2015 showed the emergence of solidarities inspired by a strong vision of a life without violence and conflict, and a conviction that peace cannot be achieved without the equal participation of women from all social groups.

“During the last decade’s attempts to reach a peace deal between the ruling Justice and Development Party and the PKK, and especially during the 2013-2015 peace process, women were at the forefront of civil society initiatives for peace, both individually and collectively.”

THE WOMEN FOR PEACE INITIATIVE: GENESIS, STRUCTURE AND EFFORTS

A major step in the women’s struggle for peace in Turkey was the establishment of theWomen for Peace İnitiative (Barış İçin Kadın Girişimi). This is a platform which includes both organisations and individual members of multiple political views, class, ethnic and religious backgrounds, as well as sexual orientations. Between its emergence in 2009 and 2012, the platform worked, on the one hand, to expand and increase campaigning for peace in Turkey, and, on the other, to discuss and document the multiple ways in which both Kurdish and non-Kurdish women suffered from war and conflict. In the context of the peace process in 2013–2015, the platform organised various events to raise social awareness of this process. It held numerous demonstrations and meetings with politicians, unions and human rights and women peace activists from other countries. It also organised fora all over the country to discuss with women of different ages their expectations for the peace process and to push the Turkish government to elaborate a national peace process plan granting the equal participation of women.

The platform set up five commissions to work on peace and reconciliation. The Women’s Truth Commission was tasked to focus on the multiple forms and dimensions of suffering that the war has brought on women. The Gender Equality and Constitution Commission sought to ensure that women’s rights and gender equality were enshrined in the constitution and to discuss legal regulations for compensation for the damages women have suffered due to the war. The Security Reform Commission had the task to determine the human security measures necessary to prevent the repetition of violations to which women had been subjected during the armed conflict. The Press and Media Commission was tasked with bringing attention to women’s demands regarding peace. And the Contact and Observation Commission had the role to observe and evaluate the peace process from the perspective of women, and to keep contact with all societal groups—especially women’s groups–and with all parties to this process.

The Women for Peace Initiative emphasised that for the peace process to be just and sustainable, it had to be placed within a sound legal framework and to include women in an equal manner as negotiators, mediators and observers. It thus sought to establish common action for peace and to create a shared language among women beyond political, ideological, ethnic and other divisions.

“The Women for Peace Initiative emphasised that for the peace process to be just and sustainable, it had to be placed within a sound legal framework and to include women in an equal manner as negotiators, mediators and observers.”

An important conference, titled “Women are Taking an Active Role in the Peace Process”, held at Boğaziçi University in Istanbul in May 2013, came up with a list of demands. Referring to UN Security Council Resolution (UNSCR) 1325 and its follow-up resolutions, the platform demanded that Turkey make a national plan for changes in the constitution that would guarantee gender equality in all areas of life. In addition it demanded the exposure of past political crimes against Kurds, punishment of perpetrators of rape and sexual harassment during war, in prison or under custody, compensation for damages during the war and return to the villages that were forcefully emptied in the early 1990s, the identification of mass graves and a recognition of women’s losses. Moreover the peace activists demanded gender and child-oriented security sector reforms, gender training for those working in the civilian administration, and the release of all political prisoners. They also insisted that the committees and commissions related to the peace process should include an equal number of women and men, and should cooperate with women’s organizations, while gender dimensions should be part of all discussions.

None of the Women for Peace Initiative’s demands were taken into consideration by the AKP. The ruling party refused to engage with the issues of transitional justice, insisting that all crimes had been perpetrated before it came into power in 2002, and that no violence had occurred during its tenure.

Nonetheless, the larger socio-political impact of the platform reached beyond its limited success in streamlining gender into the peace process. Its experience showed that political and ideological divides have an important bearing on people’s approach to the peace process, yet dialogue helps bridge differences and build alliances in the pursuit of peace. The Women for Peace Initiative built spaces of exchange, solidarity and cooperation, which unfortunately shrank dramatically after the collapse of the peace process. The reignited conflict in Turkey’s Southeast has exacerbated and deepened the polarisation and lack of trust in society, which has also affected Turkish-Kurdish feminist cooperation. Many feminist organisations were closed down by the state after the failed 2016 coup, while the remaining ones were forced to keep a low profile in order to avoid being officially banned.

Even though the collapse of the peace process and the dismal political developments in Turkey since mid-2015, especially the crackdown on peace and human rights activists, have demonstrated that women’s alliances for peace, however important and active, cannot achieve much without the support of the political parties, especially the parties to the conflict,  women’s commitment to peace and justice has endured. In this regard, UNSCR 1325 has provided both a framework and a lasting inspiration for women’s struggles to end the violent conflict in Turkey and to participate on an equal footing with men in peacebuilding processes. Women have creatively adapted and applied the Resolution’s principles to the local exigencies, while also finding a sense of empowerment by tuning into its global feminist agenda for peace.

Dr. Ina Merdjanova is a Senior Researcher and Adjunct Assistant Professor at Trinity College Dublin, in Ireland, and a Visiting Professor at Coventry University, in the UK. She has published widely on religion and politics, women, minorities, and peacebuilding in the Balkans and Turkey.

This article was published under the aegis of the Enhancing Women’s Participation in Peace and Security (WEPPS) project, whose goal is to strengthen the effectiveness and impact of the WPS Agenda in Italy, North Africa and the Western Balkans. The WEPPS project is being implemented by theERIS group (Emerging Research in International Security) of theScuola Superiore Sant’Anna in Pisa, Italy, in partnership with the Agency for Peacebuilding. It is funded by theItalian Ministry of Foreign Affairs and International Cooperation.