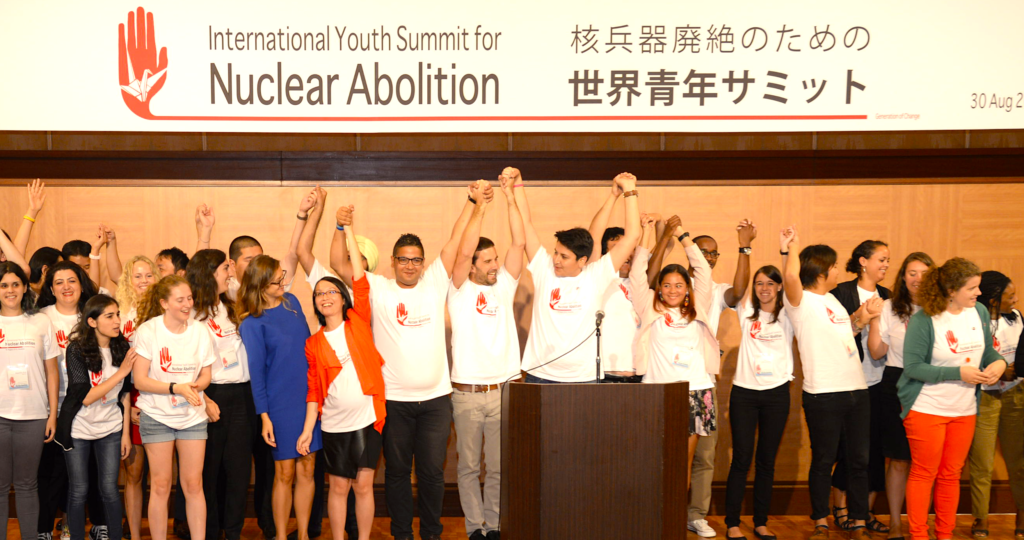 Do nuclear weapons make the world a safer place? While devastating humanitarian consequences of such weapons are undisputable, many are quick to resign to the thinking that nuclear weapons are a necessary evil. Over seven decades after the bombings in Hiroshima and Nagasaki, there are approximately 14,000 nuclear weapons in the world, with billions of dollars spent on their production, maintenance and modernization each year. From the discussions at the United Nations to public opinion polls, nuclear weapons are more than often described as an integral part of promoting national security and international peace. This muddles the definition of peace and contributes to making the public – and particularly young people – feel distant from the issue, often stemming from the lack of awareness or perceived inability to make a difference.

As a global movement of Buddhists dedicated to peace, the Soka Gakkai International (SGI) has worked on the activities for abolishing nuclear weapons for more than a half century. In 2007, the SGI launched the “People’s Decade for Nuclear Abolition”, a grassroots campaign aimed at rousing international public opinion against nuclear weapons and expanding the network of people who share the common goal of eliminating them from our planet. The People’s Decade is an example of how participation and agency of youth can be promoted in nuclear disarmament, which is inextricably linked to peacebuilding and peacemaking.

What Drives Youth Participation? To respond to this question, the People’s Decade offered a framework to encourage local initiatives and actions, often led by young people, to create spaces where participants could learn about nuclear disarmament and openly exchange their perspectives. The campaign allowed for flexibility and creativity in each participating country, using what appealed to young people in each location. While most prominent in Japan, youth in several other countries, including Italy, United Kingdom, United States, Malaysia and Thailand, have organized various activities including exhibitions, workshops, symposia, petition drives, youth awareness surveys, and collecting survivor testimonies, all with the aim of raising awareness about the issue of nuclear weapons.

In 2017, SGI then submitted a thematic paper on our initiative to the UN Progress Study on Youth, Peace and Security. One of the themes our paper explored was the question of youth participation, both in terms of what promotes it as well as its effects. The data we used for this analysis included the results of the questionnaires submitted by young people who attended People’s Decade events and activities, as well as informal focus group discussions with campaign coordinators in Italy and Japan. Several important insights emerged from our analysis.

First, involving young people is the best catalyst for engaging more youth. This may sound obvious, and somewhat contradictory, particularly in cases where youth engagement has been a challenge. However, to promote interests among young people and connect them to an issue they may feel distant from, the most effective bridge is the presence of other youth who are passionately working on it. At a People’s Decade event conducted in August 2017 in Kanagawa, Japan, one college student noted:

“We do not really have opportunities to discuss [nuclear disarmament] seriously. Japanese students do not care about it unless it appears in an exam. So when [SGI] introduce peace-related issues at school events, other students seem to be surprised. I myself was very inspired when I first saw other students involved in the issue seriously.”

In another example, university students of the Chugoku and Kyushu regions in Japan conducted a peace awareness survey in 2017 that targeted individuals in their thirties and younger, collecting 1,198 and 1,163 responses in each location. In the survey, respondents were asked if they were taking any action for peace: a great majority (70% in Chugoku and 66% in Kyushu) stated that they would like to take some action, but were currently not doing anything in particular. When asked what would encourage their engagement, more than a third of them chose “activities of other people in my generation” (38% in Chugoku and 32% in Kyushu).

Secondly, young people need to feel that their participation is meaningful. This can take many forms. In addition to demonstrating tangible impacts of their involvement, a movement can also frame youth participation in a way that appeals to who they are. A great majority of youth participating in People’s Decade activities are members of the SGI and thus practitioners of Buddhism. Many shared that they were driven by their faith, which provided the inner-motivated fuel to take actions. While sustaining youth engagement can be a challenge for peace organizations, for SGI faith is likely the reason we have been able to sustain activities involving thousands of youth globally over the last decades.

Thirdly, by participating in concrete activities youth start to see themselves as active agents for peacemaking. For youth involved in the People’s Decade, nuclear weapons were not just an issue of the past or a problem limited to survivors; they internalized the narrative and felt accountable to take action. Questionnaires from exhibitions, lectures, and workshops revealed that participants were inspired to learn more about nuclear weapons and their impacts, felt closer to the issue, and explored what actions they can take. A participant to a focus group in Italy noted:

“I always thought that certain issues should be dealt with only by those in power. Thanks to this activity I became aware of an issue that felt removed just to realize that it is not far away after all. I understood that ordinary people are of fundamental importance and that by uniting they have the power to change their environment.”

Lastly, when engaging youth in peacebuilding, above any information or structural support, forging a human connection seems to be the key. This theme appeared through elements such as the importance of storytelling, dialogue and youth networks. Although youth are often seen as digital natives, our real-life connections with others continue to play a key role in inspiring action, engaging communities and sustaining the momentum of campaigns.

For over many decades, SGI has engaged in educational activities at the grassroots levels to promote peace, and nuclear disarmament in particular. This is based on our belief that transforming the ways in which people view themselves, the world and complex global issues is critical for creating a culture of peace; and that peace and conflict ultimately begin in people’s hearts and minds. A vital element of such educational activities is to empower each individual, particularly youth, to develop a sense of agency, that their actions matter. In this regard, we hope that our experience with the People’s Decade provides useful insights for how to engage young people in various peacebuilding activities, as their voices need to be part of the future we create.