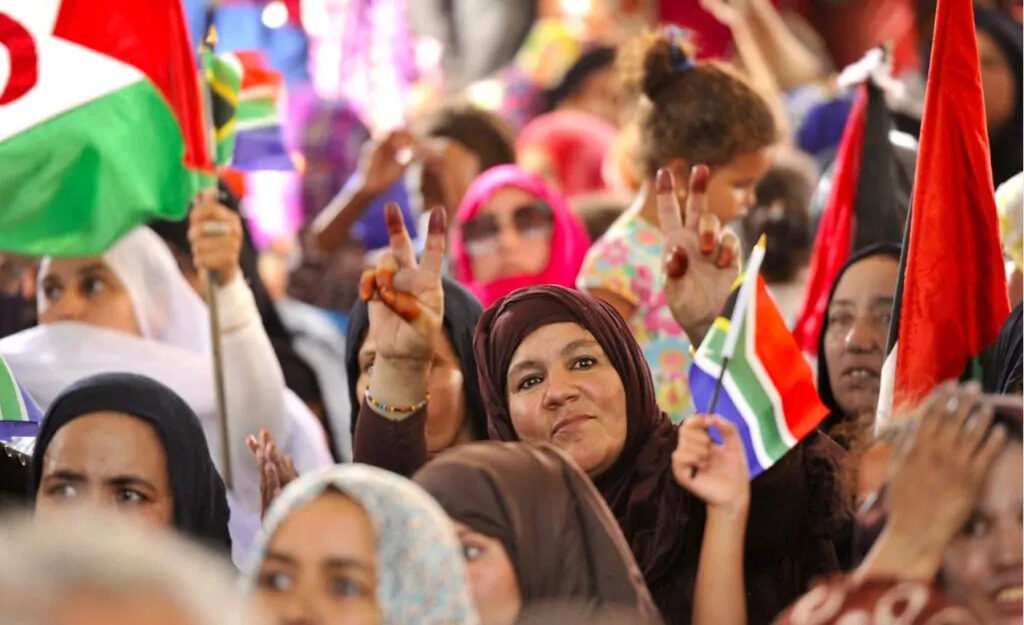 INTRODUCTION: HOW WAR SHAPED THE ROLE OF SAHRAWI WOMEN

Western Sahara – the Spanish ex-colony – has been on the UN list of non-self-governing territories since 1963 and remains one of the longest standing, yet largely overlooked, conflicts in Africa, or, as some observers called it, Africa’s last colony. The war between Morocco and Mauritania and the Polisario Front, the liberation movement who led the Sahrawi people’s fight for independence, lasted from 1975 to 1991 (Mauritania withdrew in 1979), and resulted in a large number of Sahrawi refugees living in camps in Algeria for almost 44 years, while the rest of the Sahrawi people continued to  live under Moroccan occupation. As a response to the war, the Polisario Front proclaimed the Sahrawi Arab Democratic Republic (RASD) in 1975. RASD is a founding member of the African Union and has embassies and representations in more than 80 countries around the world.

The National Union of Sahrawi Women (in Spanish: Unión Nacional de Mujeres Saharauis, or UNMS) is the women’s wing of the Polisario Front. Founded in 1974, it largely includes all Sahrawi women in the Saharawi refugee camps, in the occupied territories of Western Sahara and Saharawi women in the diaspora. The UNMS is fighting for the political and social integration of women, especially the promotion of Sahrawi women´s experience in peace and security.

Women in Western Sahara have always been involved in peace and security issues during time of both war and peace. During the years of war, while men were on the battlefront, Saharawi women were left alone in the refugee camps, which were overwhelmed by the struggle for liberation and the challenge to build the new Sahrawi nation. UNMS played a strong role in mobilizing women toward strengthening state structures and platforms, encouraging women’s participation in local governing bodies, in administering the camps, maintaining security and social solidarity, distributing food aid, organising social life, as well as running literacy campaigns and education of women in nursing and teaching. Throughout this period, and despite their difficult situation in exile, Saharawi women have demonstrated inspirational stories of social solidarity and harmony. Women, for instance, were breast feeding each other’s children and cooking for each other during the times of sorrow and grieves.

“For the first time in its history, in 2018 the Polisario Front nominated a woman as a part of the Polisario negotiation team, which consists of five members. This step is considered as a distinguished effort towards the inclusion of Sahrawi women’s voices in the peace talks with Morocco led by the UN.”

Since the war ended, in 1991, and men came back to the refugee camps, UNMS has decided to take women´s fight to another level: fighting for women’s fair contribution in politics and decision-making. It is at this moment that UNMS made itself champion of the Women, Peace and Security (WPS) Agenda at the national level. As a result, Women’s representation today is very promising as they represent 21% of staff in the National Secretariat of the Polisario Front, 34% in the National Assembly, 100% in local assemblies, 88% in the education sector, 66% in health, 27% in mine action activities and 23% in communication. Moreover, UNMS has managed, through lobbying within the Polisario leadership, to reinforce women’s representation in decision-making bodies. For the first time in its history, in 2018 the Polisario Front nominated a woman as a part of the Polisario negotiation team, which consists of five members. This step is considered as a distinguished effort towards the inclusion of Sahrawi women’s voices in the peace talks with Morocco led by the UN.

Saharawi Women are involved in all aspects of social and public life. For example, they serve as police officers, teachers, doctors and de-miners. They are a point of reference and role models for other African women. However, this very rich experience is still not given fair attention by international institutions and audiences that depicts women´s struggles and contributions.

As frustration starts to spread among youth in the refugee camps and security in the Sahel rapidly deteriorates, youth are becoming vulnerable to radicalisation. Sahrawi women do their most to provide an excellent example for their children by transmitting the values of peace and non-violent resistance to prevent despair against difficult circumstances. Inspired by UN Security Council Resolution (UNSCR) 1325, UNMS has taken the initiative for an open dialogue that integrates young men and women in  an attempt to positively create spaces for the  healthy exchange of ideas on how  to narrow the gender gap. At the same time, every year UNMS uses the International Day of Peace (September 21)  as an occasion to raise awareness among women leaders in the Saharawi refugee camps about UNSCR 1325. It is an opportunity to remind the younger generation of Saharawi women about the contribution and sacrifices of our founding mothers.

Even in the  occupied territory of Western Sahara, where life is much more difficult due to the continuing media blockage, Sahrawi women have been able to make their voices heard through peaceful demonstrations and hunger strikes. The most prominent figure who leads the non-violent protests against Morocco in the Saharawi occupied zones is Aminatou Haidar, a human rights activist who has recently won the Right Livelihood Award for her steadfast non-violent action, despite imprisonment and torture, in pursuit of justice and self-determination for the people of Western Sahara. Aminatou’s story depicts the resilience of Saharawi women who are still keen to build peace and want to live in a world of justice and democracy.

“The impressive contribution of Sahrawi women in the fight for liberation through peace and resilience can inspire other women and help shatter stereotypes around refugee women.”

UNSCR 1325 is a good reason for every women’s organisation to contribute to the larger conversation on achieving peace and security in their prospective communities. In Western Sahara, UNMS has used the WPS Agenda as a guiding methodology to achieve the empowerment of women in areas of leadership, governance, dialogue and mediation. Thanks to the strong network of women’s alliances, UNMS tends to use international platforms on UNSCR 1325 to share the extraordinary experience of Saharawi women in the refugee camps and occupied territories of Western Sahara to inspire refugee and displaced women around the world. UNMS is making efforts to change the narratives and perceptions on refugee women from victims and figures of despair to resilient and confident militants who are enthusiastic to contribute to world peace.

CONCLUSION: PUTTING A LIGHT ON SAHARAWI WOMEN’S CONTRIBUTIONS TO PEACE

Given the circumstances of the forgotten conflict in Western Sahara, UNMS still has many challenges in achieving full integration of gender perspectives in all domains of life. Many efforts are still to be made at the leadership level of the Polisario Front to ensure that women’s voices are heard in the Sahrawi National Assembly as well as in the high-level meetings of decision-making bodies.

The preparation and establishment of a National Action Plan on WPS is yet another ambitious goal for UNMS, which will need honest and fair recognition from UN agencies dedicated to women’s issues. Women’s organisations emerging from non-sovereign territories need to be embraced and included in the international women’s networks. UNMS with many other women’s organisations represent a huge number of women and have done tremendous work in their respective countries.

The impressive contribution of Sahrawi women in the fight for liberation through peace and resilience can inspire other women and help shatter stereotypes around refugee women.  At the same time, Sahrawi women everywhere still feel being left behind because their stories remain untold and the international community continues to ignore their plight. Women everywhere need their stories to be heard. This is very critical towards building a world of peace and security where humanity can always prevail.

This website uses cookies to improve your experience while you navigate through the website. Out of these, the cookies that are categorized as necessary are stored on your browser as they are essential for the working of basic functionalities of the website. We also use third-party cookies that help us analyze and understand how you use this website. These cookies will be stored in your browser only with your consent. You also have the option to opt-out of these cookies. But opting out of some of these cookies may affect your browsing experience.
Necessary Sempre abilitato

Performance cookies are used to understand and analyze the key performance indexes of the website which helps in delivering a better user experience for the visitors.

Analytical cookies are used to understand how visitors interact with the website. These cookies help provide information on metrics the number of visitors, bounce rate, traffic source, etc.

Advertisement cookies are used to provide visitors with relevant ads and marketing campaigns. These cookies track visitors across websites and collect information to provide customized ads.

Other uncategorized cookies are those that are being analyzed and have not been classified into a category as yet.