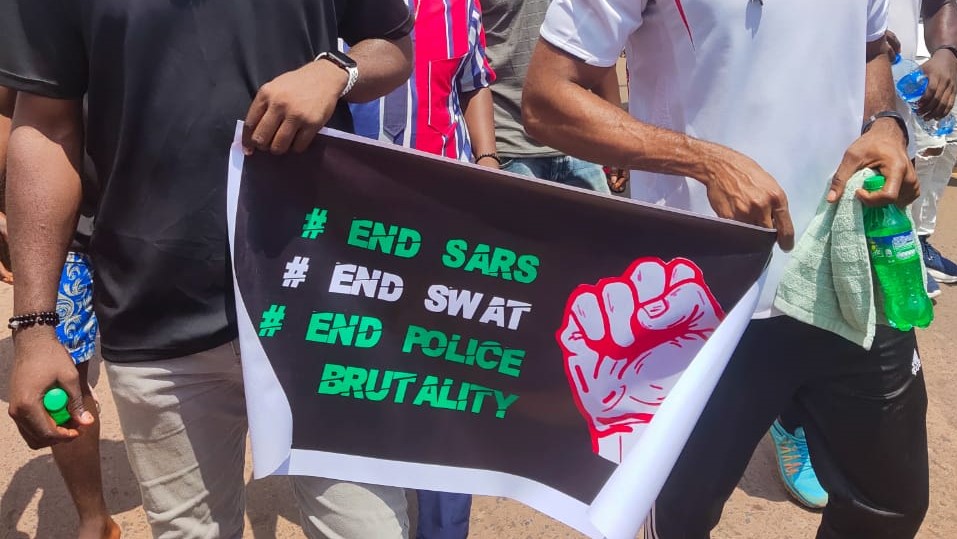 Women, Youth and Hashtag Activism: the “EndSARs Movement” in Nigeria

For many years, The Special Anti-Robbery Squad (SARs) have terrorized and abused the human rights of young Nigerians. The government in the past has failed to take action against this unit, and the plight of Nigerians have often fallen on deaf ears. Young Nigerians organized the #EndSARs protest to air their grievances and demands. The article shows how leadership of youth and women can trigger social change. The protest turned out to be the largest in Nigerian history.

From the Arab Spring to the Black Lives Matter Movement, social media has played a critical role in raising public consciousness and bringing about socio-political change worldwide. Social media activism, a form of protest or advocacy that includes using social media to mobilize public support for a cause, has evolved over time. Civil rights activists used the mainstream media in the early 1960s to expose the unspoken side of the Jim Crow bill, which made many Americans aware of the injustice towards the black community. The rise of hashtag activism, which refers to demonstrations on social media using a hashtag term, expression, or sentence, is one of the most recent trends in social media activism. #BlackLivesMatter, for example, was a grassroots movement that was primarily organized via social media.

Like many other nations, Nigeria is not immune to violence and civil rights violations perpetrated by law enforcement agencies. The increase in crime rate prompted the establishment of a Special Anti-Robbery Unit (SARs) within the Nigerian Police Force in 1992. In its early years of operation, the unit recorded positive results but was subsequently caught up in the abuse of power that characterizes many law enforcement agencies. The unit was accused of sexual harassment of women, human rights violations, torture, extortion, unlawful detention, profiling and brutalizing young people.

In a global survey of 127 nations, the World Internal Security rated Nigeria’s police as the worst in the world in 2016. A report by Amnesty International in 2020 documented at least 82 cases of torture, maltreatment and execution by members of the SARs between January 2017 and May 2020, with the target being young Nigerians. Another report by ACLED records nearly 100 events of violence targeting civilians perpetrated by the police in 2020 alone. The Nigerian Government’s failure to prosecute the perpetrators of the abuse triggered the #EndSARs movement, which started in 2016 but turned to violence in 2020. The movement gained momentum from the renewed focus and worldwide protests in 2020. What started as a peaceful protest turned to violence when protesters and armed thugs clashed at different locations.

Online and On the Frontline

Nigerian Women are not strangers to protests and speaking up for their fundamental human rights and have often been at the center stage of movements focused on social justice and reform. From the Aba Women’s Riot of  1929 to the Abeokuta Women’s Revolt to Bring Back Our Girls Campaign and the Market March Yaba. In early October 2020, videos and photographic evidence of SARs’ brutality circulated widely on the internet. These videos drew widespread attention and sparked a viral outcry, with the #EndSARs hashtag becoming the most popular worldwide.

Protests started on 8th October 2020, in Lagos, followed by chants of “Stop killing our children” sweeping the streets of Lagos on October 9th as women came out en masse to protest. In the coming weeks, the #EndSARs hashtag took over the social media space, with data showing that in the first 10days, the hashtag recorded 48 million tweets from 5 million users and 28 million tweets within the 24 hours of the flag off. Nigeria recorded 22 million mentions, with over 14 million recorded in Lagos, making 82% of the total mentions. Internationally, the United States of America had 2 million mentions while Ghana had 41 thousand. To date, the #EndSARs campaign has been the largest social movement organized in Nigeria in recent years, and this is largely attributed to women’s efforts. Thousands of people across major cities across the world took to the street to show support.

Nigerian women behind the curtain were running the leaderless revolutionary youth-led movement. After the video went viral, Rinu organized one of the first #EndSARs protests. On the 7th of October, she set up camp outside the Lagos governor’s office, demanding that the police unit be disbanded. She mobilized people on social media who later joined her in sleeping outside the state government house for 72 hours before they were attacked by the police. Aisha Yusuf, who also played a critical role in the #Bringbackourgirls campaign, joined the movement with her photo being a symbol of the movement, F.K Abudu assisted with fundraising to help protesters on the street, Lawyer Moe Odele helped ensure legal services for the unlawfully detained and several other helped with food and medical services. The sustenance of the #EndSARs protest was primarily due to the interference of the Feminist Coalition.

The Feminist coalition between the 8th and 22nd of October raised ₦147,855,788.28 ($388,000) through cash transfers and bitcoin payments. On the 12th of March 2021, the group released an official statement through its social media platform on how the funds were disbursed. These funds were spent on #EndSARs response (medical), relief for victims of police brutality and families of the deceased, legal aid network, memorial for the fallen and #EndSARs Mental health support.

The online protest gained much significant support with tweets from international celebrities such as Beyoncé, Rihanna, Hillary Clinton, among many others.

The President of Nigeria, Mohammad Buhari, agreed to disband SARs on the 11th of October. However, this in no way appeased the protesters who clamoured not just to #EndSARs, but also a total reform of the police. This was because the government promises to disband the unit following previous protests werewas never implemented. Protesters quickly made their demands known to the federal government.

The early days of the protest were generally peaceful; however, in the late hours of 20th October, the Nigerian army shot at least 12 peace protesters at the Lekki toll gate shortly after the CCTV cameras were removed, largely referred to as the Lekki massacre. Over 56 deaths have been recorded across the country since the start of the protest on 8th October.

The Aftermath and Conclusion

The ‘Lekki Massacre’ dealt a massive blow to the protest as the government’s repression tactics discouraged people from joining further protests. Over 1,500 people were arrested, and many bank accounts belonging to those who actively participated in the protest were blocked. Many high-profile activists had to go into hiding.

Nonetheless, the #EndSARs movement showed that Nigerians could escape from the ethno-religious conflict which has plagued the country for years as youth all over the country joined the protest. The feminist coalition also showed Nigerians that accountability and transparency are attainable. Although the government has set up a judiciary panel to investigate 20th October, it is unclear if justice will prevail. Nevertheless, the #EndSARs was a massive win for and women leadership and hashtag activism as it forced the hands of media organizations to report accurate information on the abuse of human rights that have characterized Nigeria’s law enforcement agencies.

The protest might not have yielded the result many young Nigerians were hoping for, but this was a win for social media activism as it provided a platform for ordinary citizens to air their views. Youth, women, and marginalized groups can use social media to participate in public and social discourse. Organizers, advocates, policymakers, and everyone else who wants their voice heard can use social media advocacy to build an inclusive platform for dialogue. The protest brought renewed attention to the power and importance of social media activism in shaping public discourse.

Eke-okocha Nnaemeka Phil is a masters graduate of Conflict Management and Humanitarian Action from the University of Siena. His research focuses on migration, food security and climate change. Phil is currently a senior fellow at Rondine Cittadella della Pace, his research concentrates around armed conflicts and sustainable peace.